The approach of restaurant chefs to recipe development differs greatly from that of editors of cookbooks and food magazines for the home cook. While researching and writing articles and books, then, my challenges include scaling down the amounts of ingredients to work for a small dinner party instead of a busy restaurant; converting grams into ounces and liters into cups; and making sure all ingredients are included in the directions or method. Many times, home cooks do not have the same equipment in their kitchens as the restaurant chef, and that must be noted and changed.

My friend Kemp Minifie, a former editor at Gourmet magazine, shared thoughts on working with chef recipes. “They know what they’re talking about,” she says, “and they’re slanting it in chef lingo. I think a lot more people today, because of having watched Food Network and cooking shows, are a little more versed in the terminology. But I’m still not sure whether they fully understand it.”

Of course, just understanding chefs isn’t always enough. Minifie says, “I think that a lot of times chefs are not going to tell you the little something extra or special ingredient that makes their food unique. It’s their trade secret. But,” she adds, “I must say we learned at Gourmet that a lot of great ideas come from chef’s recipes.”

In my interview with chef/owner Marc Swierkowski, of Ella’s Wood Burning Oven Restaurant in Wareham, I asked if he ever left out one of his trade secrets in a recipe. “Yes,” he admits, “I have done it a few times because this is a business.” I asked another friend, culinary historian Anne Mendelson, author of Stand Facing the Stove, the story of the two women who wrote The Joy of Cooking, for her thoughts on chef recipes. “I think women chefs are more connected to reality,” she says. “Many started out as home cooks or bakers. Many are more adapted to writing recipes because of their background in their home kitchen.”

Another challenge: When I travel to Italy and collect recipes there, it is twice the work to present them to American cooks. For example, on my last trip I asked for four torte (cake) recipes from restaurants and pastry chefs. If I liked the dessert, I would go into the kitchen and photograph the pastry chef while she or he wrote the recipe. Then I look at what I was given, the ingredients written in Italian, using grams, liters and Celsius. There may be one or two lines of instruction. No details. Each recipe needs translation and formatting, using ingredients found in the U.S. Ingredients are very different in Italy, so I sometimes substitute an ingredient to make it work.

Here are four recipes from four Cape Cod chefs; three who own restaurants and one high-end restaurant and resort chef. Many of these recipes have multiple parts, and you may want to use some of the ideas to add to your own meal, rather than slavishly following the whole recipe from start to finish. For example, try chef James Hackney’s salsify puree as a side for a grilled steak. Chef John Wilson suggests using his recipe for Sweet & Sour Sauce for brushing on pork chops or chicken when cooking on the grill and serve the Corn and Jalapeno Relish as a side dish. The same advice is true when you look at chef Martha Kane’s recipe for Pan-Seared Atlantic Halibut. The Romesco Sauce can be used in several ways, such as tossed into pasta or served with any variety of fish or even chicken. Try the Fingerling Potato Salad with one of your summer BBQ recipes. In chef Swierkowski’s recipe for Stuffed Squash blossoms, the Zucchini Pesto is delicious served as a first course.

Wine suggestions: for summer, lighter varieties are the rule. Depending on your individual taste, the goal is to compliment the food. Here are a few ideas. A dry rose, a French chablis, Albarino from Spain or an Italian Vermentino. Also, do not rule out a light Pinot Noir. Ask your server for a suggestion. Many restaurants import wines from smaller vineyards. They can be a pleasant surprise. 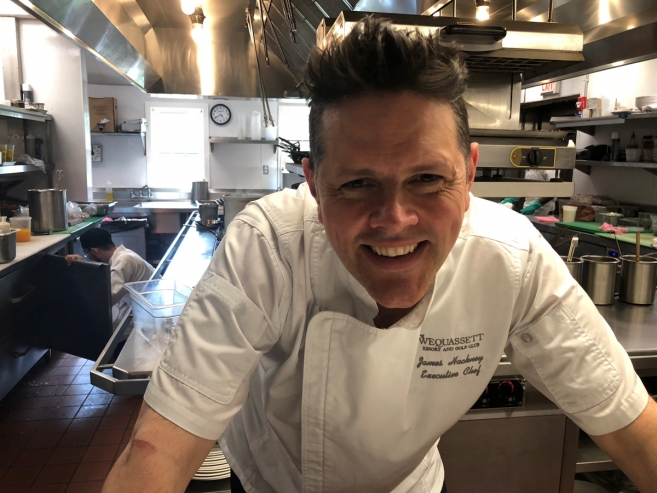